The Quran A Guide For Scientific Discovery 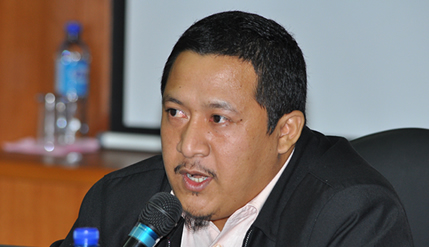 BANGI, 1 June 2012 – There are many scientific truth in the Quran which are still undiscovered that could help scientific discovery, an Islamic Scholar from The National University of Malaysia (UKM) said.

Dr Wan Nasyrudin Wan Abdullah from the Department of Al Quran and Sunah of the Faculty of Islamic Studies of UKM said the Quran contains many verses that are scientific in nature like verses that explain the constellation of the stars and the position of the sun being the centre of the solar system in the universe.

But it must be remembered that the Quran is not a book of science but a book of signs. A Scientist who wants to decipher the scientific truth in the Quran must have certain credentials.

The scientist must understand the Quran, perform the five daily prayers and spend his money for good causes. These are the criteria. It is not as simple as taking a translation of the Quran and trying to understanding it. It must be understood in the original Arabic language.

Dr Wan Nasyrudin was speaking at the Quran and Science seminar organised by Centre of Applied Physics Studies, Faculty of Science and Technology here.

He said each of the prophets had their own miracles; Moses with his cane that can part the sea, Jesus was able to bring the dead to life. But such miracles cannot be experienced anymore and we are now left with stories about them.

But with the last Prophet, Muhammad (PBUH) the miracle that was given to him still exists to this very day and that is the Quran. The Quran is a linguistic miracle, he said.

The language of the Quran is scientifically precise and to uncover the scientific truth one needs to understand the Quranic language. “You can’t do this with a translation,” he said.

Many of the scientific truth in the Quran was only discovered after modern science confirmed them. This should not be the case as the Quran should be a guide leading scientific discovery.

There are over seven hundred verses in the Quran that clearly deal with scientific facts. While almost half of the Quran contains stories and lessons to be learnt, these stories usually have scientific truth hidden behind them, Dr Wan Nasyrudin said.

Scientists, should look at the Quran for their next discovery, because it has stood the test of time and has proven to be consistent with modern science. However in searching for discovery from the Quran, science must be interpreted in the light of the Quran.

If a scienctific discovery seems to undermine the verses of the Quran, then the scientists should look deeper, because their discovery is invariably flawed if it appears to be inconsistent with the Quran.

Untill recently, the moon was thought to emit its own light. This is inconsistent with the Quran because the Quran says the moon reflects light from the sun. Scientist later did discover that the moon did indeed reflect light from the sun.
The seminar was moderated by Asso Prof Dr Muhammad Samudi Yasir from the Centre of Applied Physics Studies. Scientists and students attended the seminar.