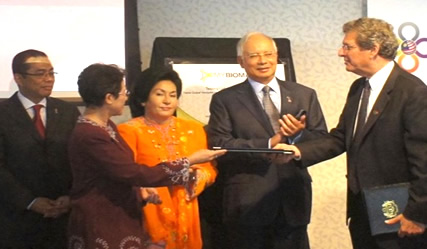 NEW YORK, 16 May 2012 – The National University of Malaysia(UKM) today signed a memorandum of understanding (MoU) with the New York Academy of Sciences (NYAS) to forge strategic alliance for developing Nobel Laureate mindset among UKM’s PermataPintar students.

In another signing UKM representing Malaysia Research University Network (MRUN) signed with NYAS and the State University of New York (SUNY) for ‘cradle to career’ programmes.

The ceremony was held at the New York Academy of Sciences at the World Trade Center in conjunction with the Second Global Innovation and Science Advisory Council (GSIAC) meeting here.

The signings were witnessed by Prime Minister, Datuk Seri Mohd Najib Tun Abdul Razak who is on a working visit to the United States and Datin Paduka Seri Rosmah Mansor who is also the Patron of PermataPintar.

Creation of the Nobelist mindset is to develop the ability to pioneer frontier research endeavours and develop new theories/philosophies, the cornerstone to humankind survival in the 21st

Exposure to international science and mentoring programme under world renown Nobel Laureates are important elements of creating the next generation of scientists. Experts agreed that exposure to research through career exposure, introduction to lab skills and lab culture and mentoring by role models is a more effective method of inspiring the next generation of scientists.

The New York Academy of Sciences is reputed to be one of the world’s nexus of scientific innovation in the service of humanity and had brought together extraordinary people working as the frontiers of discovery and promoted vital links between science and society.

It is not only a notable and enduring cultural institution in New York City but also one of the most significant organisations in the international scientific community.