Authenticity Of Malay Language Needs Protection From Too Many Borrowed Words 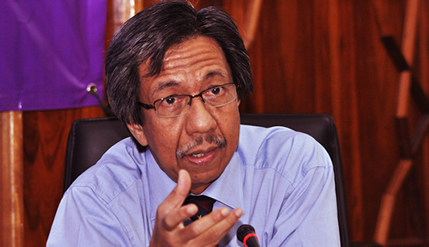 BANGI, 2 Nov 2012 – The authenticity of the Malay language has to be protected to prevent it from being overwhelmed by borrowed words, a Malay language expert at The National University of Malaysia (UKM) said today.

Professor Dr Teo Kok Seong, a passionate believer in the strength of the Malay language expressed concern over the propensity to borrow words when Malay terms are already available.

Prof Teo, who is a Principal Fellow at the Institute of The Malay World and Civilisation (ATMA) UKM was speaking at a discourse here today on issues besetting the Malay Language.

He said the Malays should be more passionate in defending the authenticity of their language.

If the attitude of borrowing and absorbing words is carried on without an actual need, the Malay language would be robbed of its authenticity.

He said the erosion of the authenticity of the Malay language occurs because the Malays are not passionate enough in ensuring their language remains unvarnished.

The Malays, he said, lacked the resolve of the Chinese when it comes to protecting their language who were prepared to even go to the extremes.

The propensity of borrowing and absorbing foreign words needed to be done soberly as the Malay language has a rich bank of vocabularies to choose from.

This lackadaisical attitude of borrowing foreign words can be seen in all sectors of society even the name of places like in Putrajaya which is the country’s landmark.

He subscribes to reasonable borrowings of words but not the wholesale borrowings when there are already Malay words available. Such practise should desist as it could influence today’s generation who have the responsibility to leave an authentic Malay language to the next generation.

He cautioned that due to the propensity of borrowing and absorbing too many English words, a time may come when people needed to refer to an English dictionary just to know the exact meaning of the borrowed Malay word. One example he cited was modulasi for modulation.

The discourse brought panelists from the tourism and banking industries which conclude that a company does not need to have an English name to gain international recognition.