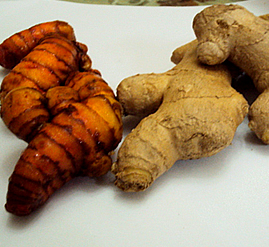 BANGI, 12 Oct 2012 – A study compiling the preparations and usage of local medicinal plants to provide postnatal care found Malay traditional practitioners do not have any formal training.

“Knowledge and traditional prescriptions they have are passed from generation to generation merely by word of mouth.

“In the context of socioanthropology, the structure of the Malay traditional medicine is not fixed and rigid, thus allowing improvements and changes to be made according to suitability and current needs,” said Associate Professor Dr Jamia Azdina Jamal.

She carried the study with Dr Khairana Husain from the Drug and Herbal Research Centre, Faculty of Pharmacy, The National University of Malaysia (UKM) and Dr Zakiah Abd Ghafar from the National Pharmaceutical Control Bureau.

She said the study found various methods were used in the treatment of illnesses including use of herbal medicines such as spices, medicinal plants and animals; physical treatment such as massage, suction therapy and circumcision; as well as spiritual treatment such as recitation of the Quran and performing prayers.

The study “Medicinal Plants used for Postnatal Care in Malay Traditional Medicine in the Peninsular Malaysia” published in the Pharmagocnosy Journal, found that 23 preparations made from parts of 128 medicinal plants were used in providing postnatal care.

Dr Jamia Azdina and her team compiled information on the preparations which were categorised as jamu, fresh herbs, eye drops, poultice, medicated talcum powder and bathing solution. The medicinal plants comprised of 52 species belonging to 42 genera and 27 families.

As the objective of the study is to compile information on the type and purpose of preparations, as well as the type and parts of medicinal plants used, they interviewed seven randomly selected Malay traditional medicine practitioners individually based on a set of questionnaires given prior to the interviews.

“Treatment is often carried out by body massage with either ordinary cooking oil or medicated oil. Massage has been found to be beneficial for relaxation of the body, as well as for relieve of joint and muscle pains and stiffness,” she said.

Sometimes a mixture of medicinal plants, commonly known as jamu (unprocessed or dried natural materials used for medicinal or health care purposes), is prescribed to the patient. Jamu is traditionally used for the relief of minor illnesses, as health and food supplements, as well as in cosmetics. 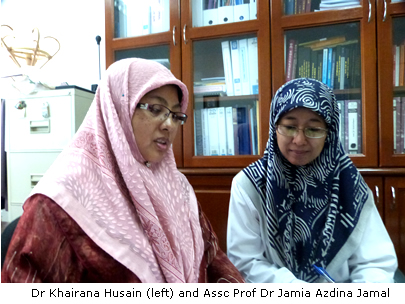 Dr Jamia Azrina said that most Malay communities believe that special attention and care should be given to a new mother during her confinement in order to help restore energy and vitality.

Jamu is usually given in the morning, followed by body massage for at least three consecutive days. Later, hot compression using a wrapped hot stone is applied onto the abdominal part.

A medicated paste is then spread over the stomach and the waist is bound tightly with a long piece of cloth. Additionally, a medicated paste may be applied onto the forehead and face.

“In the Malay traditional medicine, jamu is traditionally used in post-partum medication to help improve blood flow, warming and refreshing of the body, speed up contraction of the uterus and tightening of the vagina, encouraging bowel movement and preventing vaginal discharge.

“Jamu often contains a mixture of various medicinal plants and plant parts as found by the study. It is given orally in a form of either herbal pills or hot water decoction or hot water mixture.

“The composition of jamu is found to vary according to individual practitioners. The finding seems to agree with the statement of researcher Prof Dr Kamaruddin Mat Salleh that the practice is not rigid. This is unlike other traditional or complementary practices whereby certain ailment is treated with a specified medicine, she said.

In the study, 61 medicinal plants of 35 species were found to be used in the jamu preparations and the most frequently used include Curcuma longa L. (in 5 preparations), Coriandrum sativum L. (3), Kaempferia galanga L. (3), Parkia roxburghii G.Don (3), Quercus infectoria Oliv. (3) and Usnea barbata Fries (3).

The applications of C. longa in the Malay traditional medicine have been recorded by Burkill for parturition and other ailments related to afterbirth such as amenorrhea, diuretic, lactagogue, swelling, tonic, urogenital problems and wound healing.

In the study, the poultice is made up of a mixture of lime (Citrus aurantifolia Swingle) and juice of either Tamarindus indica L. or Zingiber officinale Roscoe and is applied onto a mother’s abdomen.

“This is said to encourage contraction of the uterus and slimming of the abdominal part. The latter traditional use could be associated with the findings that methanol and ethyl acetate extracts of Z. officinale reduce abdominal fat deposition in vivo,” she said.

Medicated talcum paste, pilis, applied onto a mother’s forehead is traditionally believed to help improve poor vision and to treat headache after childbirth.

On the species used, Dr Jamia Azrina said that 15 species in 4 preparations have been compiled by the study. Cinnamomum zeylanicum Blume (in 4 preparations), Eugenia aromatica Kuntze (3) and Piper cubeba Bojer (3) are three most commonly utilised in the pilis. 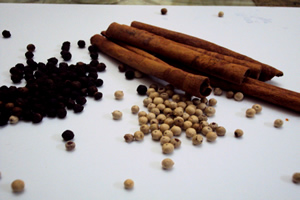 Only E. aromatica has been reported to be used traditionally in the treatment of headache. Eugenol, which is the active ingredient of E. aromatica, is found to inhibit monoamine oxidase A in vitro and has antidepressant activity in vivo.

It has been revealed that methanolic extract of K. galanga has antinociceptive effect in vivo and the hexane extract has sedative property. In addition, O. sativa has been used in the traditional preparation of the Sundanese in West Java, Indonesia in the treatment of dermatitis.

O. sativa could also be used as an excipient in the powdered mixture due to the high content of starchy materials for easy and uniform application of the paste.

“In the Malay traditional medicine, new mothers are encouraged to bathe with water-boiled leaves or roots. In this study, 17 medicinal plants in two preparations were compiled and Alpinia galanga Willd. (in 2 preparations), Zingiber cassumunar Roxb. (2) and Cymbopogon spp. (2) are found to be common ingredients of the solutions.

“The use of aromatic herbs is believed to help remove body odour, to freshen the body, to make the body feel warm, to help expel wind from the body and to smoothen the skin, “ said Dr Jamia Azrina.

The applications on the skin could be supported by the fact that essential oil of Z. cassumunar is active against dermatological infections caused by bacteria, dermatophytes and yeasts and C. citratus oil has potent in vitro antifungal effect against Candida spp.

In addition, A. galanga extract has protective effects on UVA-dependent melanogenesis.

In this study, Dr Jamia Azrina found that fresh herbs are consumed, for example, leaf of Centella asiatica Urb for stimulation of breast milk and rhizome of Z. officinale for warming of the body.

“Although there is no scientific evidence that C. asiatica is galactagogue, interestingly its water extract has been shown to enhance learning and memory of mice during the postnatal developmental stage. Additionally, the methanolic extract of C. asiatica has antioxidant activity[30] and the asiaticoside has wound healing effects.

“One of the practitioners also mentioned the use of P. cubeba juice eye drop to improve poor eyesight of a mother after childbirth. The use of herbal eye drop in postnatal treatment is not a common practice,” she said.

The study showed that as many as 52 species of medicinal plants from 42 genera are found to be used in the 23 post-partum traditional preparations.

However, the use of black seed or black cumin (N. sativa) that is not grown locally is rather surprising but could suggest the influence of Prophetic Medicine in the Malay traditional medicine because of the belief that black cumin is a remedy for every disease except death.

Most of the preparations use rhizomes of the Zingiberaceae species; whereas the leaves are mainly used in the bathing preparations. It is also interesting to learn that different parts of a plant are used for different preparations and purposes.

For example, the Z. cassumunar rhizome is used as internal jamu preparation whereas the leaves are used in the external herbal bath. Frequency of the use of plant parts found in this study is different from the previously reported ethnobotanical studies, whereby roots and leaves are the most commonly utilised plant parts in the remedies. This may exemplify the diversity of traditional practices based on cultural differences.