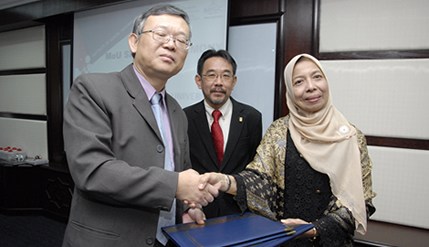 BANGI, 12 Oct 2012 – The National University of Malaysia (UKM) and the National Central University of Taiwan (NCU) today signed a Memorandum of Understanding (MoU) to conduct collaborative research and expertise, particularly in the field of Visual Informatics.

NCU was represented by its Interim President Dr Joseph S. Lee and witnessed by its Dean of EECS, Prof Wang Wen June.

Prof Dato’ Halimah hoped that the cooperation would eventually help create an awareness of the importance of having a national profesional body of computer scientists in Malaysia, just as the medical, engineering and legal professions have their own board.

She said UKM is also interested in how universities in Taiwan create their own start-up companies to market innovations and inventions.

The MOU, she said, reflects UKM’s confidence in the NCU as a centre for research and academic excellence as well as undertaking many programmes in educational collaboration.

UKM sees the cooperation as an international network of collaboration in planning and implementing the transfer of knowledge and technology and work culture from the NCU.

She extended an invitation to NCU post-graduate students to take part in UKM’s international mobility programme.

Prof Wang urged UKM to apply to the Taiwan authorities for research grants in which Malaysian post-graduate students can use NCU’s facilities.

He was happy that NCU would be able to share knowledge with UKM and invited UKM scientists to do research in electronics there.

He said NCU is well placed to be a partner with international universities as it is ranked number five in Taiwan.

He said although NCU started out as a university of Earth Sciences, its strength now is in electronics.

The NCU is one of seven research universities in Taiwan. It has scored some major international honours, such as the first virtual education city in the world, according to the EduCities , and produced the world’s first Plasma-Crystal for electronic displays.

Its status on the QS Universities World Ranking scale is 278 for Engineering and Technology.

The NCU was founded in Nanjing, China in 1915. After Taiwan broke away from mainland China in 1949, NCU was re-established on the island in 1962.

NCU is only a half hour drive from the Taiwan Taoyuan International Airport, which makes it very convenient for international travel.