UKM To Unlock Its Assets Potential to Produce New Talents 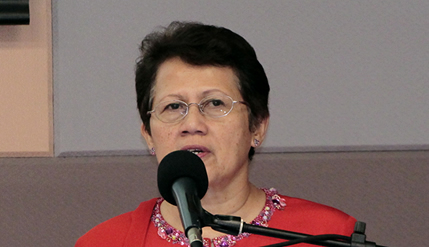 BANGI, 2 Oct 2012 – The National University of Malaysia (UKM) aims at unlocking the potential of its assets to produce new talents as well as technological innovations from its intellectual property for wealth and job creation.

The university is already producing a new talent pool of engineers, scientists, inventors, product development experts as well as entrepreneurial managers to harvest the value of its start-ups.

She said through its start-ups, the university has been able to converge its creative genius with business ingredients to create entrepreneurship and new business development.

Speaking at the launching of the third Tuanku Ja’afar Law Conference on Academic Entrepreneurship and University Start-ups  by UKM Chancellor, Tuanku Muhriz Ibni Almarhum Tuanku Munawir here today, she said UKM is integrating innovation and entrepreneurship in its undergraduate and postgraduate curriculum as well as its research and development efforts.

This allows for its faculty members, researchers and students to work in a learning environment enriched with experiences for bringing research output to the marketplace.

Thus Academic Entrepreneurship adds value to the university’s traditional roles of generating knowledge through research and disseminating it through scholarly publications and providing education at both the undergraduate and postgraduate levels as well as service for the public good.

In carrying out its new role, she said, the university needed to overcome the differences in culture, values and environment of the marketplace and academia giving the difference in academic need for unrestricted publishing and the business need for commercial confidentiality as an example.

To date it has executed 15 licenses and launched 33 new technology firms which have created at least 70 jobs ranging from CEO to CTO, COO, CFO, Project Managers, Business Development and Entrepreneurs-in Residence.

The conference, she said, would go a long way in sharing findings from research on the Legal Analysis of Academic Entrepreneurship, the development of better Intellectual Property Policies and legal safeguards for start-ups.

In addition there are also issues over the use of faculty time to pursue commercial goals out of university research and the unfounded concerns that academic productivity would be affected when commercialisation goals are pursued.

She also said that adopting the Innovation and Entrepreneurship (I&E) culture as core academic values requires a major mindset change among academic faculty, students and administrators.

She gave the expericence of the US Massachusetts Institute of Technology (MIT) as an example of the entrepreneurial impact where its alumni had set-up 25,800 companies employing 3.3 million people generating an annual worldwide revenues totalling US$2 trillion in 2009, the equivalent of the 11th largest economy in the world.

The conference is held in conjunction with the opening of the university’s new moot court, which not only serves mooting activities, including moot competitions, but also ‘mock’ trials.

At UKM, arguments on pre-selected questions of law or ‘mooting’ is an optional extracurricular activity while mock trials is part of a compulsory course on Advocacy and Litigation undertaken by final year students.