Role Of Globalisation Should Feature When Discussing The Country’s Independence 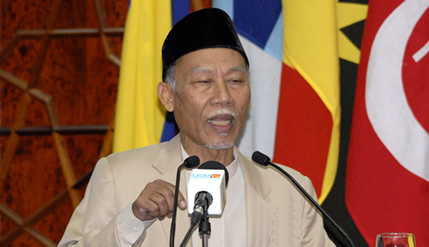 BANGI, 10 Sept 2012 – Discussions on Malaysia’s Independence should be more comprehensive and include the role of globalization such as the cold war between the West and the Communist bloc.

An international affairs expert, Professor Dato’ Mohamad Abu Bakar said the Cold War was an important external factor but did not feature much whenever independence of the country was discussed.

Giving the Independence lecture series on Independence and Universality; Malaysia in the Era of Change at The National University of Malaysia (UKM) today, he said the Cold War between the ideologies of the Western countries and the Soviet Union and China forced European governments that colonised countries in Southeast Asia, including Malaya, to speed up the independence process.

The United States pressed Britain to speed up independence of its colonies in Southeast Asia to counter the growing Communist movement which were claiming to be on the people’s side.

He said Washington was worried that the British government in Malaya was seen as a ruthless imperialist at a time when the Communist insurgency claimed to be liberators.

Prof Mohamad said Malaya then could not avoid globalization as it was caught up in the Cold War in the 1950s and received threats from neighboring countries in the 1960s.

Britain and the United States wanted the country to be pro-West and it was thus important for the transition of power be made to a pro-Western government which had received popular support at the General Elections in 1955.

Prof Mohamad said the shifts due to globalization are affecting the current economy and politics of the countries of Southeast Asia, including Malaysia.

He cited today’s situation, in which countries that Malaysia had tense relationships with in the past, such as Indonesia and China, are now close trading and political partners. All this indicate significant changes occurring in the country due to globalization.

Prof Mohamad is a lecturer at the Department of International and Strategic Studies and a former Dean of the Faculty of Arts and Social Sciences, UM.

He has presented more than 350 papers at various conferences in Malaysia and overseas and featured on talk shows over the BBC and Al Jazeera.