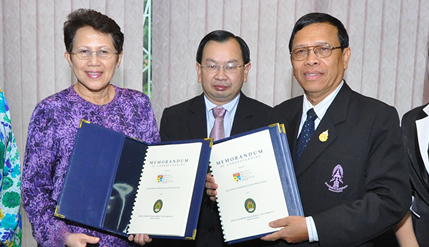 BANGI, 11 Sept 2012 – The National University of Malaysia (UKM) is to assist Phetchaburi Rajabhat University (PBRU) in Thailand undertake research and the teaching of the Malay language there.

A Memorandum of Understanding (MOU) was signed here today by the two universities to facilitate the programme which they believe will strengthen usage of Malay in the Southeast Asia Region.

Prof Sharifah Hapsah said the MOU presents an excellent opportunity for UKM to take a step forward as a centre that promotes the Malay language in the region.

The MOU is to also develop collaborative language research focusing on English and Thai as well between them that could lead to collaborative presentations, writings and publications.

The MOU will also present opportunities for students and staff of PBRU to strengthen their command of the Malay Language. A Malay language society will also be set up in PBRU

It will also provide opportunities that could pave the way for cultural exchanges thus allowing students and staff of both universities to expand their exposure and more importantly nurture understanding for the future generations in the region.

Numerous activities have already been planned including two-way student mobility programme involving internship at both undergraduate and postgraduate levels, short courses and training for staff of both universities.

PBRU will also be able to participate in Social Sciences conferences organised by UKM from this year.

Dr Niwat Gin-ngam said the benefits accrued from the MOU extend beyond just the future generation in terms of knowledge but will also strengthen the ties between the two countries.

Such collaborations between countries always result in greater benefit than initially envisaged as it will trigger other similar collaborations which are not anticipated, he said.