UKM Students Reminded To Be Responsible When Making Public Statements 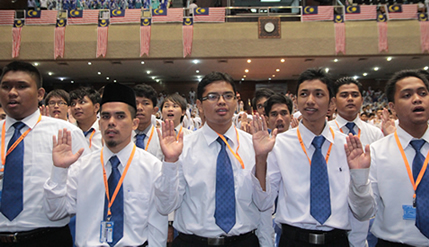 BANGI, 7 Sept 2012 – Students at The National University of Malaysia (UKM) are allowed to freely express themselves but must be careful when making public statements.

They must also express their views in a responsible manner especialy when exressing their feelings through their social media sites which they are fond of using.

She said Section 15 of the Universities and University Colleges Act (UUCA) 1974 had been amended to allow students who reached the age of majority to join political parties.

However, to protect the interests of the university’s role as an educational institution, partisan politics are still barred from the campus.

She expressed confidence in the maturity and wisdom of the undergraduates saying that they should not do anything that may jeopardise the integrity of the university.

The students were reminded that their parents and guardians have great hopes for them and they should wisely use the opportunity afforded to them to further improve their education.

Over 2,600 new students had registered in UKM on 2nd Sep. They consisted of 2,561 who registered as ordinary faculty students, 38 international students and 17 students enrolled in the Educational Development Centre.

Prof Sharifah Hapsah also advised the undergraduates to at least be bilingual emphasising the importance of English in academia. 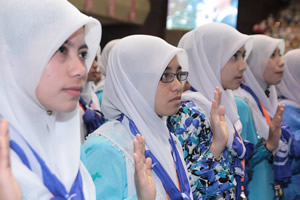 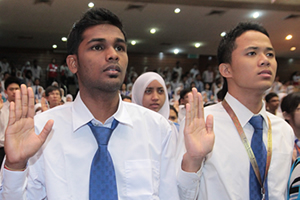 The university is undertaking two measures to raise the standard of English among its undergraduates. One is to monitor their English proficiency through tests conducted by the Language Centre. Another is by setting up English-only speaking zones at all residential colleges.

The policy is not to sideline Bahasa Malaysia, as all students are expected to already be proficient in the national language.

Prof Sharifah Hapsah also urged the freshman to respect and communicate with foreign students adding that they should behave themselves at all times.

Also present were the Deans of all the faculties and heads of institutions.