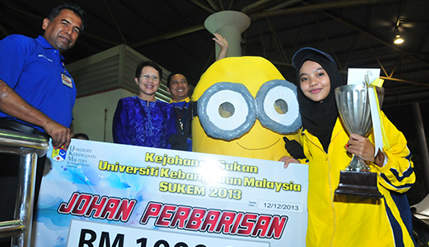 The Best Parade award was the highlight of this annual SUKEM event at the newly-refurbished UKM Stadium which was alight with colour, dancing, mascots and music.

KTSN’s parade performance was simple yet structured and flawless. Part of their brilliant success was their creativity in having a “Minion” as their mascot. The “Minion” is a character from the Universal Pictures Animated Film “Despicable Me” franchise.

Tan Sri Dr.Sharifah commended the students for their effort, creativity and passion in making the parade lively and full of humour.

She also applauded the effort by the KIY Football team, which had been beaten in the final by KAB with a 3 – 1 score line.

She added that even though KIY was a small college and sometimes did not have enough students to take part in sporting events, they defied the odds to make it to the final.

Nevertheless, she noted that KAB had six of their current students who are national team players from the Harimau Muda Squad.

“They play for Malaysia, I don’t think it’s fair if you lump them all in one team. No, next time we separate them, give the rest of the colleges a chance at winning football for once,” Tan Sri Dr.Sharifahsaid jokingly.