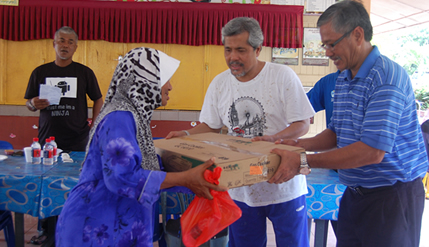 PEKAN, PAHANG – 17 Dec, 2013 – The National University of Malaysia (UKM) has carried out its first humanitarian mission to help flood victims in Kampung Pulau Manis, near here and nearby villages in Pahang.

The university’s Office of Social Relations (PHUM) in collaboration with the Centre for  Corporate Communications (PKK), the Zakat unit, the Islamic Centre and the Faculty of Social Sciences and Humanities ( FSSK ), pooled their resources to come to the rescue.

Some 30 UKM Psychology Postgraduates and six officers aided with the clean-up at a school, the Flood Relocation Centre, a mosque and several homes devastated by the floods that hit Pahang recently. Joining the cleanup operation was state assemblyman Dato’ Khairuddin Mahmud, residents, members of the Puteri Umno Sayang Squad, the Red Crescent and the Fire and Rescue Department .

During the two-day mission , UKM’s PHUM and Zakat volunteers  also donated gas stoves, food, school supplies and some money to ease the hardship of the victims in kampung Pulau Manis,  Tanjung Pulai and surrounding villages. The donations were  was presented by Dato ‘ Khairuddin and UKM officers.

During the handover ceremony , Dato ‘ Khairuddin expressed gratitude on behalf of the residents for the help given by UKM and other donors.