Cooperation With Cambridge Varsity For Research On Climate Science 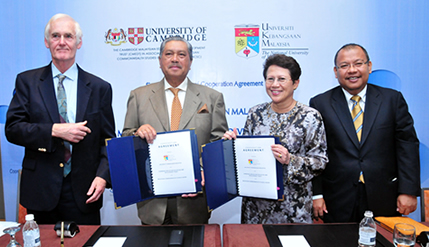 PUTRAJAYA, 19 Nov 2013 – The National University of Malaysia (UKM) is to cooperate with an entity of the University of Cambridge to carry out research into climate science in Asia.

A cooperation agreement was signed between the Cambridge Malaysian Education and Development Trust (CMEDT) in association with the Malaysian Commonwealth Studies Centre (MCSC) at the British university and UKM to formalise the collaboration.

The cooperation agreement will establish the Asian Network for Climate Science and Technology (ANCST), which will, among others, promote disaster prevention and climate resilience in Asia through capacity building and outreach programmes. The web portal of the ANCST was also launched at the function.

Tun Ahmad Sarji, who is also UKM Pro-Chancellor, said the agreement was timely as Asia experiences most of the natural disasters in the world and referred to the recent super typhoon Haiyan, which ravaged and devastated central Philippines earlier this month which could become more common.

Super typhoon Haiyan is acknowledged as the worst ever since records began.

Tun Ahmad Sarji noted that the fifth report by the Inter-Governmental Panel on Climate Change (IPCC) in September projected that increases in rain related to the monsoon was quite likely in East, South and Southeast Asia.

Budget for the research will be provided by CMEDT/MCSC to mobilise partnership among several universities and research centres in Malaysia and the region.

Through the cooperation agreement, UKM’s South-East Asia Disaster Prevention Institute (SEADPRI) will serve as the coordination centre for ANCST.

In her welcoming remarks, Prof Sharifah Hapsah said SEADPRI is a suitable choice to lead the national consortium of universities in conjunction with the Academy of Sciences Malaysia to carry out the research.

She said the cooperation agreement was also aimed at supporting academic and research activities through staff exchanges and collaborations of common interest.