UKM Civilian Staff In Shooting Competition With Its Cadet Officers 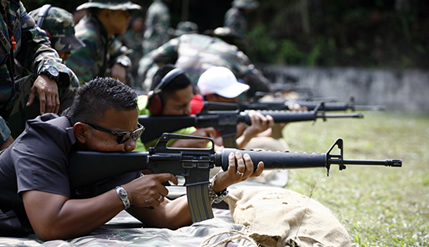 Some 60 reserve officer cadets from the two universities and 40 spectators participated in the the shooting contest, organised by the Royal Malay Regiment (RAMD) here today.

The training of USIM’s reserve officers are being undertaken by UKM.

Head of the UKM ROTU Training, Lt Col Mohd Sahar bin Haji Said said this was also the first time that non-military UKM staff were invited to witness the UKM and USIM event.

He lauded the enthusiasm shown by the civilians describing the exercise as encouraging.

Among the participants were Vice-Chancellor, Prof Tan Sri Dato’ Seri Dr Sharifah Hapsah Syed Hasan Shahabudin, who is Commandant of UKM ROTU and staff of the various faculties, centres and security guards.

In the contest, participants were divided into 16 groups of four each with mixed military and civilian members.

The match was held in a knock-out format with each winning team going on to the next round until only two groups remained for the final.

Eventually, a group made up mostly of UKM security guards emerged the top team.