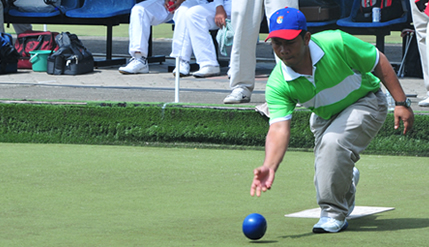 Collecting one Gold for the Boys Triples category and one Silver for the Girls Triples category, UM were crowned the overall winner of the competition. They received the Championship Trophy along with individual prizes. The Lawn Bowling tournament was organized and hosted by The National University of Malaysia (UKM).

The competition between institutes of higher learning, from Universities, Community Colleges to Polytechnics, is to discover new talent from within the student body as well as to promote the Lawn Bowling sport, said Deputy Vice Chancellor (Alumni and Student Affair) of UKM, Prof Dato’ Ir Othman A. Karim at the closing ceremony at the Lawn Bowling Sports Complex, at Seremban 2, Negeri Sembilan recently.

Prof Othman said that the tournament was also to promote a healthy competitive nature among the students and was also a good way to cultivate cooperation and friendships between the institutions, their staff and students.

Dato Othman handed over the prizes to the winners, accompanied by Director of UKM Sports Centre Dr. Tajol Arifin Mohd and the Vice President of the Lawn Bowls Malaysia, Supt. Syed Zainal Abidin.

Following are the winners: