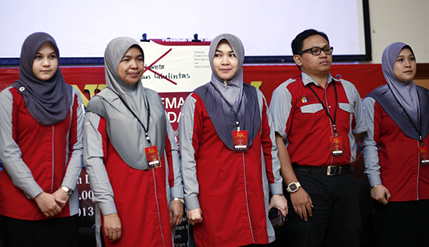 BANGI, 8 Oct 2013 – The team representing the Treasury Department of UKM named (METIA) won the Convention of Innovative and Creative Teams (KIK) 2013 at the university level as well given the award for best presentation.

UKM Bursar, Mohd Abdul Rashid Bin Mohd Fadzil said the convention is aimed at resolving typical problems in the bursar departments of universities while also discussing evolvement of a good mechanism towards establishing an effective delivery system as outlined in the  Higher Education Strategic Plan of Vision 2020.

Public universities, he said, needed to emphasis more on the delivery systems as they often deal with academics and students.

“We must be prepared to use service-oriented IT systems to reduce red tape and allow most of the information to be accessed via the information system,” he said at the closing ceremony of the Convention  at Puri Pujangga in UKM today.

He hoped such conventions continue to be held in the future in the effort to produce creative and innovative staffs.