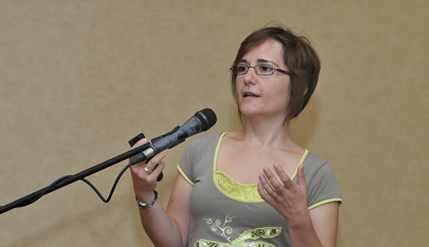 A scientist from, Ghent University Belgium, Dr Natalie Gonzales made the representation at the 2nd Asian Regional Conference on Systems Biology held at the Equatorial Hotel here today.

The 2 day conference organised by The National University of Malaysia (UKM) attracted speakers and participants from six countries. They presented the latest findings in system biology and molecular developments from around the world.

Dr Gonzales said the Intrinsic Yield Genes or yield booster can influence the leaf size of plants by controlling its cell proliferation and cell expansion. This in turn will affect the yield of the crops.

What is unique about the study is that scientists have found genes that made crops not only more resilient to weather conditions but give better growth during normal times.

The yield booster would change the amount of cells recruited to make the leaf and regulate cells expansion. Thus it can withstand the external elements.

The study was done on Arabidopsis that belong to the cabbage family and maize, a type of corn. The findings reveal that when expose to mild environmental stress such as increase in temperature, water deprivation and even mild drought, the yield booster kicks in and help the plant grow better.

Using the system biology approach the plants were put under scrutiny at the molecular level.

It was discovered that the yield booster gene has the intelligence and ability to make sure that the plants has a fighting chance when put under mild stress.

The study also identified many key genes affecting crop yield and stress tolerance have been identified and spectacular increases in plant productivity can be obtained by advanced molecular breeding and genetic engineering.

The implication of the research is great. One is that using system biology approach where science works with nature a solution can be devised for coping with future anticipated problems like increasing temperatures caused by climate change and the ballooning world population that need to be feed.

Beyond the technical jargon of the research it is comforting to know that plants have the resilience to ensure that they end up on the dinner table even when faced with adverse environmental factors.