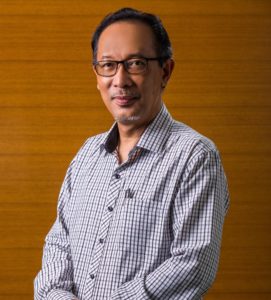 Professor Dr. Zulkifli is a Senior Professor in Environmental Hydrology at Universiti Teknologi Malaysia. He obtained his Bachelor and Master degrees from UPM in Environmental Science and PhD in Environmental Hydrology from University of Manchester in 1996. He was the Dean of Water Research Alliance, Chairman of Resource Sustainability Research Alliance, Director Institute of Environmental and Water Resource Management (IPASA) and Senate member.  In addition, Zulkifli was the Chairman of Public Awareness Committee for the Malaysian International Hydrological Program (MIHP), Council Member of Malaysian Water Association (MWA), Secretary of the IWA’s Specialist Group, Group Leader (Hydrology and Climate Change) of Asia Core Program under the Japanese Society for the Promotion of Science (JSPS) and Panel evaluators of MOSTI’s research grants. Currently he is a Board Member of Lembaga Urus Air Selangor (LUAS, Since 2009), Head of domain/cluster of research grants (FRGS, PRGS, TRGS and LRGS) under the Ministry of Education, Group Leader of Asian Network on Climate Science and Technology (ANCST), and Chairman of for CIDB/CREAM’s Technical Committee on Development of Flood Risk Assessment and Flood Vulnerability Index for Critical Infrastructure. In 2015, he was appointed as  Chairman of the Flood Disaster Research Program under the Ministry of Higher Education with a total grant of RM 20 million.  As recognition to his achievements, he was conferred Fellow of Malaysia Academy of Science (ASM) in April 2012 and the recipient of Malaysia Outstanding Water Award for Research in 2019. He has authored and co-authored about 400 articles, of which 105 are indexed in ISI, 50 in Scopus, 30 book chapters, 8 books and the rest are proceedings.   He is now one of the editors of Water Science and Technology, a journal published by IWA.  He was a key researcher for European Union (EU) research project on Innovative Decision Making for Sustainable Management of Water in Developing Countries and recipient of Eco-Frontier Fellowship Awards from the Ministry of Environment, Japan for three consecutive years (2003, 2004 and 2005). In 2012 and 2018 his team won UTM’s best consultancy award.  He was involved in studies on groundwater level rise at the Nabawi Mosque in Madinah and flood risk study in Madinah Al Munawarah. Between 2012-2016 he headed UTM’s team to study on safe rural water supply in Cambodia with focus on arsenic removal from groundwater. Now he is working on RM 7.8 mil.  research grant from the UK Research Institute (UKRI) on water security together with collaboratories from UK, India, Ethiopia and Columbia.