Circular RNAs (circRNAs) are characterized by the absence of 3′ and 5′ ends of covalently closed-loop structures (1). Because of their low abundance and uncommon characteristics, these circRNAs are only considered as by-products of abnormal splicing events and hence do not receive much attention. Nevertheless, research on circRNAs has increased tremendously over the past few years. These circRNAs are found to be functionally relevant, particularly in maintaining cellular homeostasis such as cell cycle control, cell signalling, response to cellular stress, and many more within the human body (2). CircRNAs are more stable than linear RNAs and can be found in tissues, serum, and urine (2). The biological implications of circRNAs were only investigated in a small fraction of the already identified circRNAs whereby most of them were proposed to function in the cytoplasm as miRNA sponges (3). Another important function of circRNAs is that they can also bind to proteins (4). A molecular protein reservoir was created by binding specific proteins to circRNAs and working as decoys to facilitate a prompt response to extracellular stimuli (3); some may even encode peptides. CirRNAs are also resistant to ribonucleases such as exonuclease and RNAse R due to the lack of free ends (2). 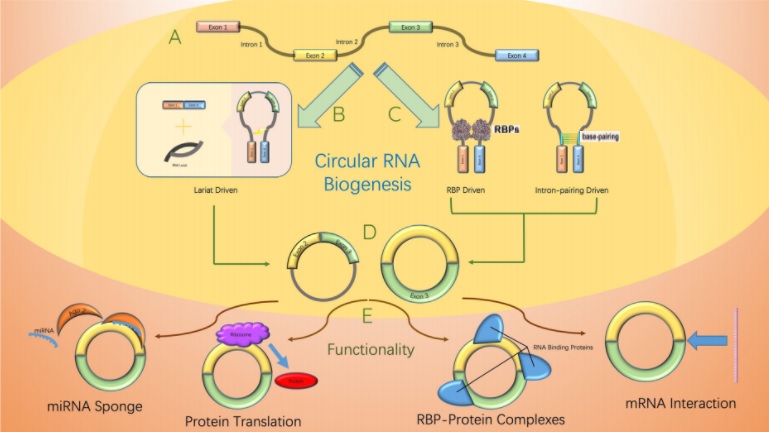 Recent studies have demonstrated abnormal expression of circRNAs in tumour tissues. To date, several cancer-associated circRNAs were identified by various research groups (Table 1). These circRNAs could function as either oncogenes or tumour suppressors in several cancer types and may modulate the cancer phenotypes in various ways.

RNA sequencing (RNA-seq) is the common method for genome-wide profiling of circRNAs but the RNA-seq detection efficiency and sensitivity could be the limiting factors (16). The circRNA junction spanning reads is the only direct evidence being used in the analysis. However, these particular junction reads typically comprise less than 0.1% of the reads generated in a total RNA-seq experiment, so the detection efficiency is low. Only thousands of circRNAs can be found in one sample (17). Compared with other common methods, such as RNA-seq, the high-throughput circRNA microarray method is an effective, sensitive tool for detecting and studying circRNAs. Microarray, however, can detect only known circRNAs. The RNA-seq should be an appropriate tool for identifying novel circRNAs (18). Validation of circRNAs is a multi‐step passage; this can be achieved with a standard qPCR experiment using divergent primers (19).

With the development of the circRNA field, numerous bioinformatics tools and databases about circRNAs have been developed to facilitate the analysis of circRNAs (Table 2). This results in the prediction of millions of circRNAs in different short-read RNA-sequencing (RNAseq) datasets. These databases also contain various circRNA annotations, such as circRNA tissue- and disease-specificity, circRNA–miRNA interactions, circRNA–RBP interactions, circRNA coding potential, and conservation amongst species.

In UMBI, several circular RNA-related studies have been conducted. We have managed to publish two research articles on circRNA in CRC. The first study was looking at the exosomal circRNA microarray profile in FOLFOX-resistant colon cancer cells. In the exosomes of the FOLFOX-resistant HCT116-R cell line, we found 105 upregulated and 34 downregulated circRNAs (20). The second study was an ongoing publication regarding the potential of circ-EPHB4 in CRC as a biotarget. We found that circ-EPHB4 and linear-EPHB4 were both upregulated in CRC tissues and cell lines in our research. We discovered that circ-EPHB4 interacts with three different miRNAs and that downstream pathways include cancer-related pathways, using in silico analysis. Apart from that, we demonstrated that circ-EPHB4 can affect the migration process in CRC cell lines, though more experiments are needed.

As we learn more about circRNAs, the potential applications that they can provide continue to expand. CircRNA functions as a master gene regulator in the development and progression of CRC, as well as a novel therapeutic target with more robust effects for treating CRC due to its ability to dampen miRNA function and regulate protein function. CircRNA potential may one day become an important screening tool for CRC prevention and treatment CRC. The understanding of its mechanisms that govern it are still unknown and need to be investigated further.