Caenorhabditis elegans are small, free living nematodes which can barely be observed via the naked eye (Figure 1). They can be found in natural environments. The worms feed on bacteria found in the environment. In the laboratory, the worms are usually fed with the bacteria E. coli of the OP50 strain. Even though it is very much smaller than any animal and human, this tiny worm has been studied as a model organism for animal biology for more than 5 decades. A brief introduction of the biology of C. elegans can be read in our previous article here: http://www.ukm.my/umbi/news/caenorhabditis-elegans-a-model-organism-for-research/ 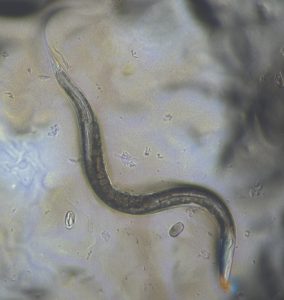 A lot of work has been carried out to study the phenotypic and behavioral properties of C. elegans. The nematode was the earliest multicellular eukaryote to have its whole genome sequenced, enabling discoveries into its >20,000 genes and their function. With the arrival of the post-genome era, various techniques to study proteomes of organisms were developed. This led to the generation of the “proteomics” field, where it refers to the identification and quantification of all the expressed proteins of a biological sample. Proteomics is used to understand protein function, interactions and its contribution to biological processes.

Early strategies to profile C. elegans proteins and subsequently the proteome include polypeptides micro-sequencing via Edman degradation. The time-consuming method was then replaced by gel separation of the proteins via one or two-dimensional (2D) gel electrophoresis, so that complex proteins can be resolved prior detection via mass spectrometry (MS). Using gel-based proteomic analysis, researchers profiled proteins of the wild-type N2 C. elegans strain in their development stages of embryo, L1-L4 larvae and adult worm. Intriguingly, protein expression of the nematodes remains fairly constant during development, with only less than 50 proteins that were observed to be either up- or down-regulated between the early stages of embryo and L1. Protein expression changes were mostly involved in cytoskeletal processes during ontogenesis. Proteins involved in the dauer stage transformation were also identified.

Temperature-dependent changes in the glp-4(bn2) mutant strain of C. elegans were studied using gel-based proteomics. glp-4(bn2) mutants can only be propagated at 16oC; they are sterile at 25oC and this characteristic has been utilized in survival assays to study host-pathogen interaction. Expression of heat shock proteins appeared to be affected by temperature, and this observation was also found in the wild-type N2 strain. Novel C. elegans proteins involved in reproduction and embryonic development were also identified using gel-based proteomics.

With the advent of next-generation proteomics, quantitative MS-based proteomics replaced gel-based proteomics, and the approach provides researchers with powerful tools to study C. elegans. Larger quantities of proteins (>4000) are now identified in the nematode in this 2 years, compared to results from gel-based proteomics (only < 200 proteins). More and more protein differences across various developmental stages are being investigated. Advancement in sample preparation for MS-based proteomics, including labeling (SILAC, iTRAQ), immuno-precipitation (IP) and enrichment of protein(s) of interest, will now allow investigations into expression and quantification of low-abundance proteins in specific C. elegans cells. Temporal dynamics of protein expression, protein localization in the organism, as well as post-translational modification after it is subjected to experimental conditions, are now actively being studied in C. elegans.